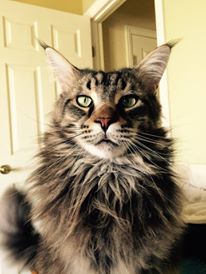 To forestall the inevitable trolling (and boy, have I experienced a lot of that!) I must state that I unequivocally refuse to exploit my cat. Yes, I did turn down two offers for Spock to endorse cat products, and no, I am not crazy. I have always considered people who would exploit their kids or their pets for personal monetary gain to be several shades of despicable. That said, now the furor has died down, I now have a community of about 7700 followers who are very interested in the pictures I post, and the messages I’m giving. I have to do something with this.

I’ve counted the languages I’ve seen on the comments, posts and messages on the page, and I’m up to 16. Spock has followers in the US, Canada, England, Ireland, Scotland, Wales, Finland, Sweden, Norway, The Netherlands, Belgium, France, Germany, Switzerland, Poland, Russia, Czech Republic, Serbia, Croatia, Italy, Spain, Portugal, Brazil, Colombia, Japan, The Philippines, China, Hong Kong, Thailand, Singapore, and Australia. That’s a lot of coverage, and they have one thing in common – they love big cats. All this, when about a month ago, I was seriously considering taking down his Facebook page. So the PR Pro in me wonders what do I do with it now?

As a lifelong volunteer supporting various Women’s and Children’s causes, I’ve decided I should use Spock’s visibility to promote the cause of pet adoption. So many people have messaged me on the page asking where they can find a huge cat like Spock. Rather than point them toward breeders, I feel adoption is something that transcends borders and cultures. I realize have to do it very carefully to not shove anything in the faces of Spock’s many followers.

It’s going to be a work in progress. I’ve started with a few plugs for Maine Coon Adoptions, a wonderful organization from which we’ve adopted two pets – our first MC, Gentle Ben, who died shortly thereafter of lymphoma, and our current MC/Abyssinian mix, The Fluffball. As time goes by, I’ll be highlighting other pet rescue groups.

I’ve also started the “Friday Friend Day” to showcase a few of the posts people put on my page with pictures and stories about their pets. Many are touching examples of the happiness and love both parties have found in their adoptions. Diane and I will be going through them each week, and figuring out which ones to show. My goal is to eventually repost all the pets shared by their ‘bipeds’.

I’m hoping to figure out a few other ways in which I can make a difference with this ball fate has cast in my direction. I have a feeling this will take up more of my time than I originally planned.  I can now add another path to This Thing Called Retirement.